UX / UI / Branding
Overview
Quakeable is an app that helps simplify the process of creating an emergency plan and kit for people to stay safe and connected during an earthquake.
Awards
RGD SoGood 2020
Time Frame
3 Months

Research
Quakeable came out of a school project in which we were asked to create a solution based on the topic of something unseen, unheard and unknown. I chose to research earthquakes, an unseen event with unknown effects, and a phenomenon I am underprepared for. Scientists believe a major earthquake could hit the Lower Mainland at any time. The area, which includes Metro Vancouver, has 60% of British Columbia's population. I asked: how can we help people better prepare for earthquakes?
‍
To better understand my audience, I conducted an online survey of 54 people in the Lower Mainland. I found that only 24% had an emergency plan in place, and only 36% of them had an emergency kit ready and available. For the purpose of this project, let's assume the results are an accurate representation of how prepared Vancouver is in general. That would mean the Lower Mainland Emergency Services would expect ~65% of the population to be underprepared, putting extreme stress on existing emergency systems.
‍
In interviews with local organizations such as North Shore Emergency Management and Neighbourhood Labs, I discovered that people in the Lower Mainland were not taking advantage of existing earthquake preparation resources available to them. I found there were a lot of educational events and online information; these resources were hard to access and visually unappealing. Most unprepared survey respondents and interviewees said too little time and too much information kept them from preparing. Psychology research suggests that under preparing is a common behaviour as humans often miscalculate risk and think disasters won't happen to them, even if they occur.
‍
Based on my research, I focused on finding a solution to remove barriers to creating an emergency plan. 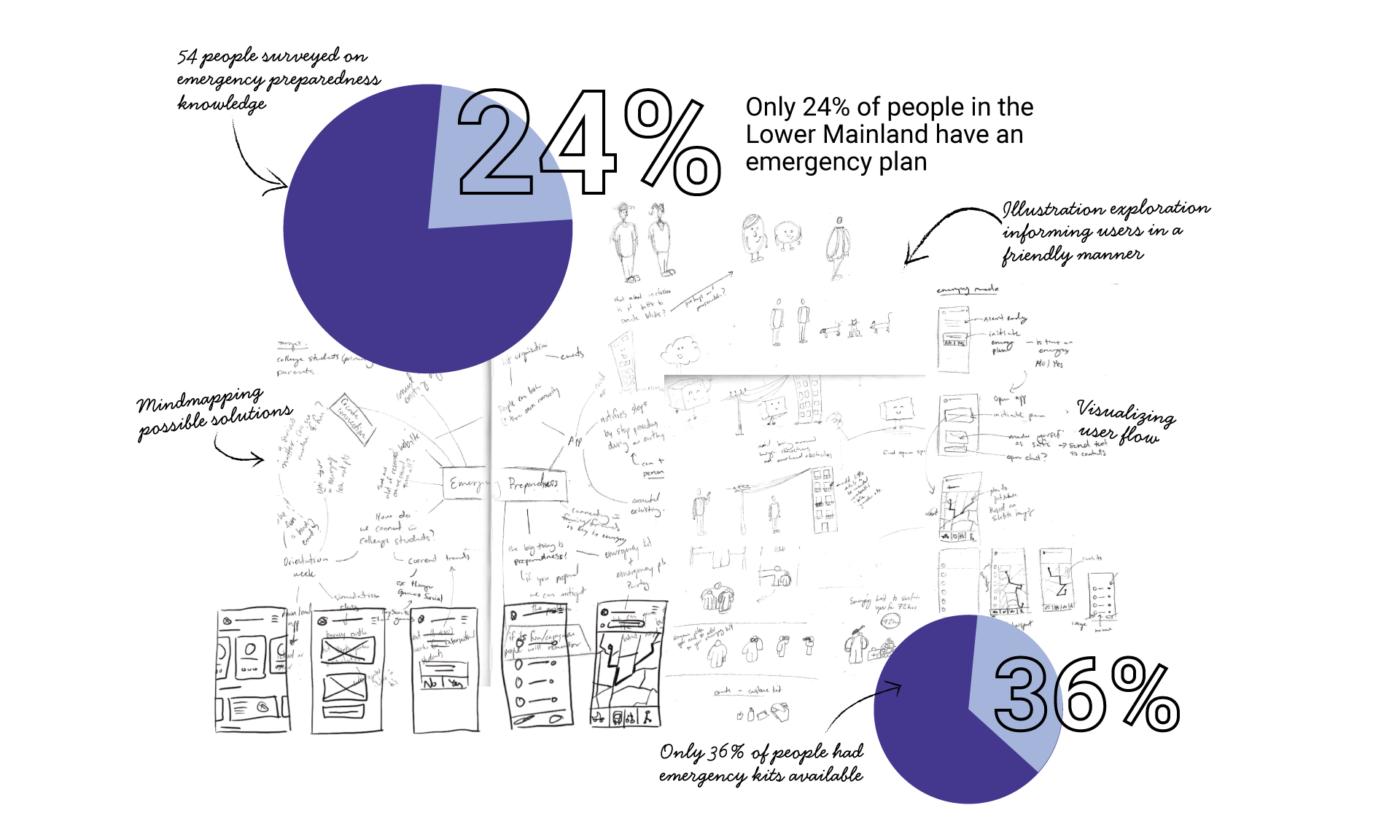 Design
Based on my findings, I recognized the solution would need to be user-friendly and concise, delivering essential information in an easily digestible format. I developed Quakeable, an app that simplifies the process of creating an emergency plan and kit to help people stay safe and connected during an earthquake. Quakeable breaks down the process of creating an emergency plan into its simple onboarding system.
‍
Through the onboarding process, users set home and work addresses, build their earthquake kits, and connect with family and friends to make sure they are on the same earthquake plan. Once the onboarding process is complete, the app notifies users when they need to update their emergency kit, alerts them of earthquake preparedness events in their neighbourhood, and periodically prompts them to make sure their information is up-to-date. 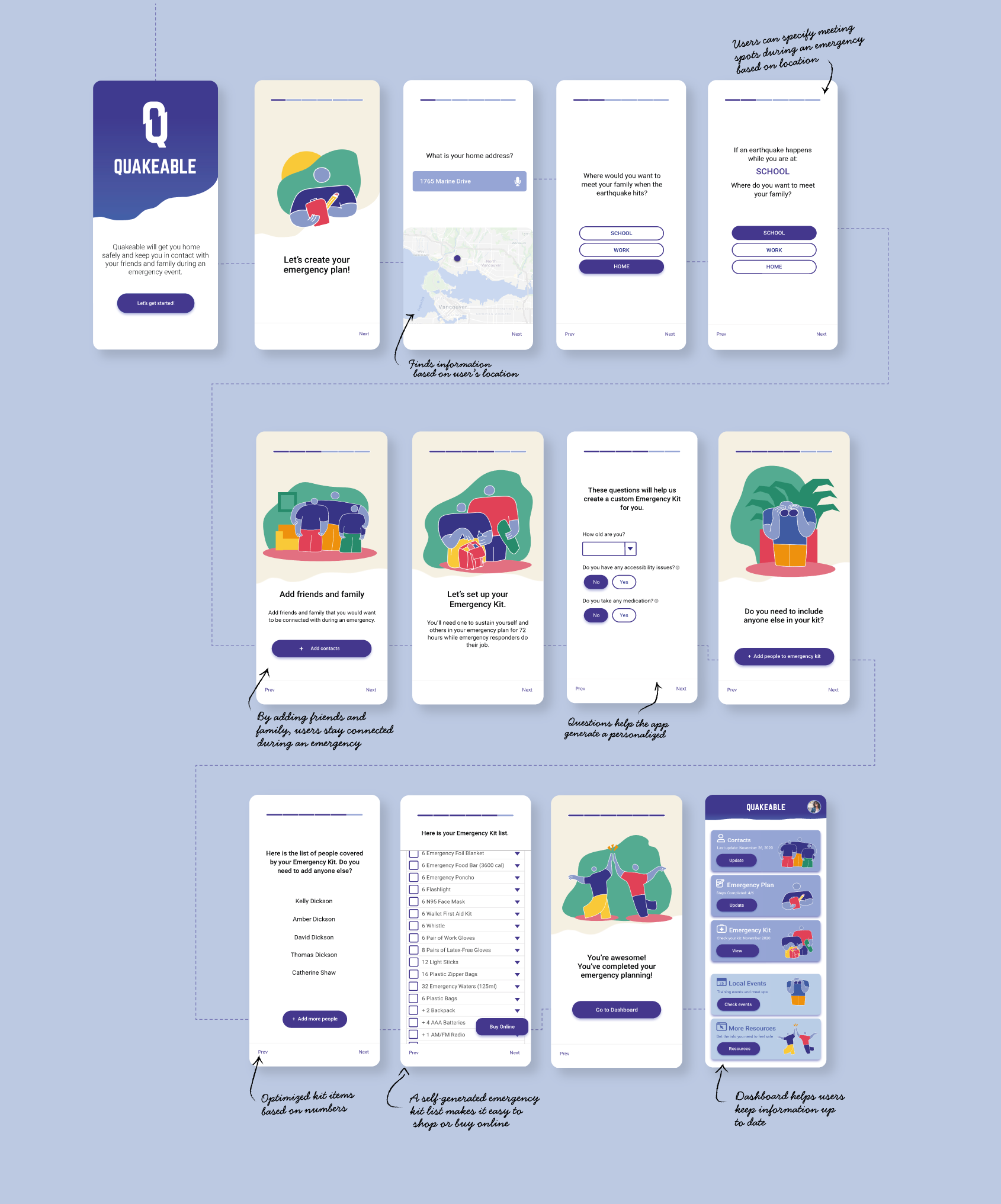 Emergency Mode
When an earthquake hits, Quakeable helps guide people through the situation, supporting them in safe decision-making. The app helps users navigate to their designated safe meeting point, provides a messaging platform to keep them connected with loved ones, and gives them a strategic list of actions they can complete to help stay safe. 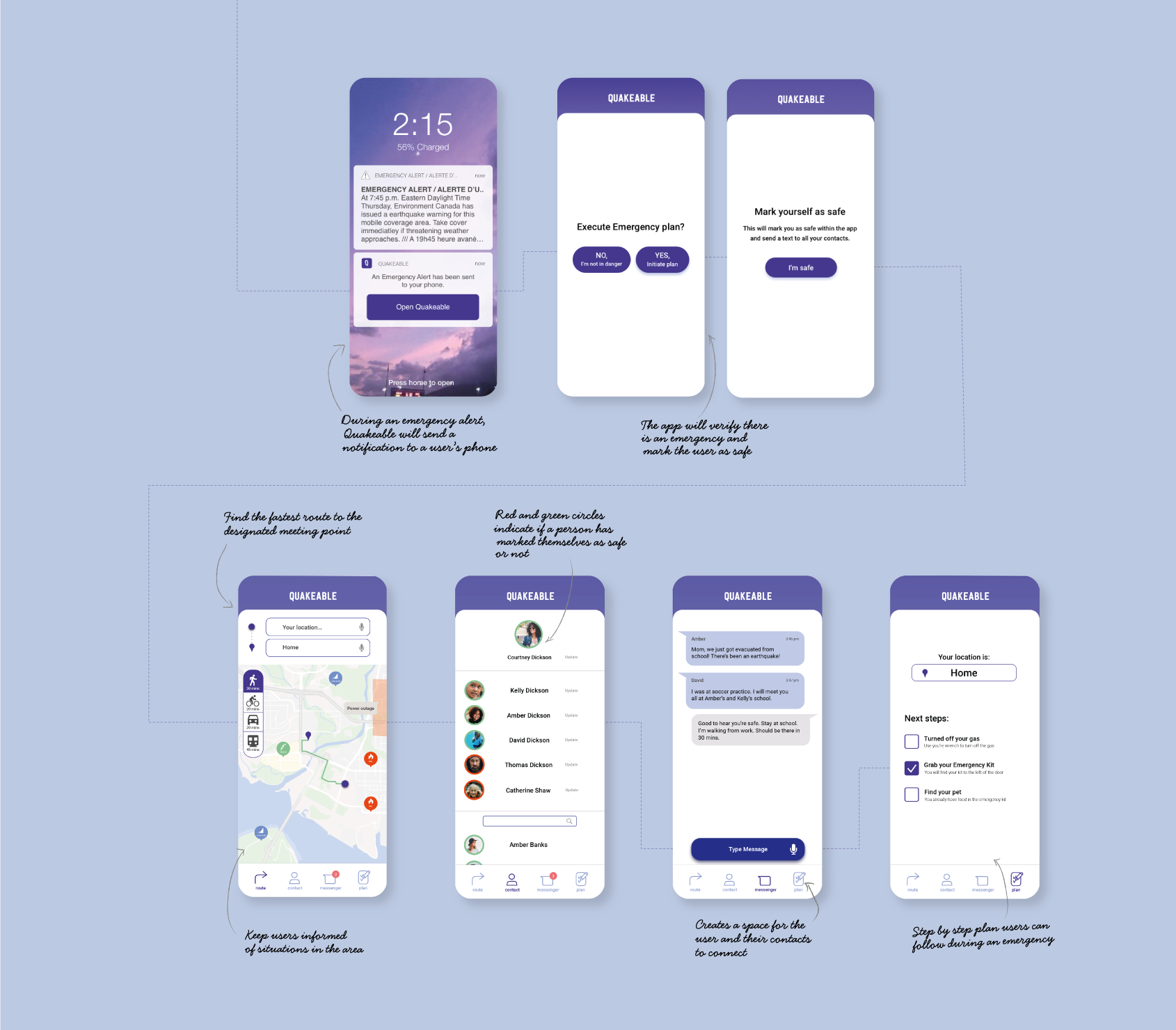 If you like what you see, let's work together.
Give me a shout!
hello@courtneylamb.ca
Linkedin